Please note that our sales and management team are working from home on normal hours, and are available online or by phone as usual. Our team are used to working remotely, so your ability to get plans drawn and priced will be unaffected by the current lockdown.

In one instance, one of our Solid Timber homes remained completely unscathed following the 7.8 earthquake in Waiau, despite the home being positioned literally 30 metres from the fault line. Many other homes and buildings in the same small town were decimated and in ruins.

Watch the amazing footage of that Waiau home the day after the earthquake, and the happy homeowner here (footage courtesy of the New Zealand Herald):

We regularly have owners of Fraemohs homes contact us saying how safe they felt in their homes during the earthquakes. Here are a few:

“The best earthquake proof house – it handled the 7.8 no problems. I’d recommend to anyone going to build. Cheers Fraemohs.”

“Hi, not sure if this is of interest to the design team at Fraemohs but we have a 35 year old Fraemohs house on piles near Waiau so wanted to let you know that we are delighted to report no earthquake damage. The house coped very well with a huge shake.”

“I was in Hanmer in a wooden Fraemohs chalet trying to fix my phone while my wife watched a TV movie when the first big 7.5 hit. I have to say the chalet was great – strong as a boat in a storm as we rocked and rolled. It was built on a good thick concrete pad and the interlocking beam walls performed perfectly.”

“The house just rattle and rolled and then settled back into position again.”

“I live in a Fraemohs home in Spencerville and after 3 major earthquakes we have had no damage. Thanks Fraemohs for keeping my family safe.”

“Just a couple of kilometres up the road virtually an entire subdivision got ruined by the earthquakes – but our Fraemohs didn’t even require repairs. The only thing on our property to suffer damage was the driveway!”

“We have just moved to a property with a 70s original Fraemohs house – it rolled with the quake but we still felt safe – unlike the Chch house that broke apart in Feb 11.”

“Thanks Fraemohs, I feel safe in my home”

“Our 1981 Fraemohs home on poles in Mt Pleasant Chch had no damage requiring repair other than a hot water cylinder. Recommend!”

The following is an excerpt from a report titled Performance Of Houses During The Christchurch Earthquakes of 22 February 2011 by Andrew Buchanan, David Carradine and Hugh Morris for The New Zealand Society for Earthquake Engineering Inc:

“While these buildings were reported to have moved significantly during the earthquake, the damage observed after the event was minimal, even in cases where significant ground settlement (up to 200 mm) was observed. It was noted that for Fraemohs houses built using 63mm thick (2 and 3 laminates) walls, there were some cases where small portions of the timber sections had sheared off near the bottoms of walls, as shown in Figure 43. This was reported to be the most severe damage to any of the inspected Fraemohs homes and it was noted that the failures occurred in places where the laminates were half notched, therefore having a smaller cross section.

No damage was observed in Fraemohs homes made using 93 mm thick, 3 ply laminates. A Fraemohs house located in the Avondale area of Christchurch was found to have only minimal separation of some of the log/timber courses even though the house suffered differential settlements up to 100 mm, cracking of the concrete floor slab, and severe liquefaction resulting in several tonnes of silt needing to be removed from inside the house and from the surrounding yard.”

As the above excerpt shows, despite being subject to serious movement of the ground and supporting foundations, Fraemohs Homes suffered only minimal damage. This damage was observed only in those homes with 63mm thick walls. As a result, we now use 100mm thick 3 ply external walls and 60mm thick internal walls as standard so our current homes are even more earthquake resistant.

For more information on why timber homes perform well in earthquakes, refer to the Timber Homes page of this website. And to learn more about our earthquake resistant Solid Timber homes, click here.

The highly durable Solid Timber, or the stylish, contemporary Timbermode - which do you prefer? 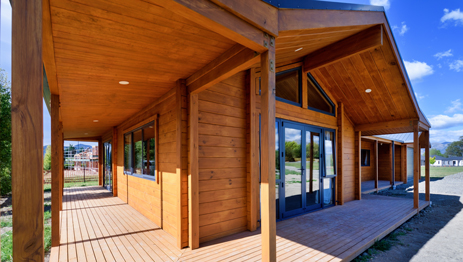 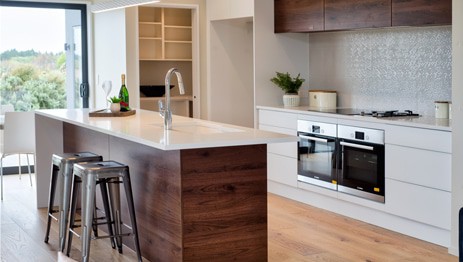